The annual Selma celebration that commemorates the fight for voting rights will go forward in March. The event will take place despite the tornado damage to the city. Organizers say the Bridge Crossing Jubilee will take place from March 2nd to the 5th. The event, and the focus it brings to Selma are needed more than ever. A tornado with winds of 130 mph swept through the city this month. The storm destroyed houses and uprooted large trees across a twenty two mile long damage path. The area, along with others in the South impacted by the storms, was declared a major disaster area.

Alabama Public Radio collaborates with the “Selma Sun” and Black Belt News Network for coverage of the area, including the recent tornado.

The annual event remembers “bloody Sunday.” It was the March 7, 1965 when white state troopers attacked Black voting rights marchers attempting to cross the Edmund Pettus Bridge. The demonstrators included future civil rights icon and Georgia Congressman John Lewis. Two weeks later, the Reverend Martin Luther King Junior. led demonstrators out of Selma on a march to the Alabama Capitol. The marches and images of the violence shocked the nation and helped galvanize support for passage of the Voting Rights Act of 1965. The commemoration draws visitors to Selma, including politicians paying homage to on of the key moments in the civil rights movement. Vice President Kamala Harris spoke last year in Selma. Then-President Barack Obama in 2015 gave a speech at the foot of the city's Edmund Pettus Bridge to mark the 50th anniversary of the civil rights marches from Selma to Montgomery.

APR produced an international award-winning documentary on the 50th anniversary of “bloody Sunday.” You can hear “More Bridges to Cross” by clicking on the link below. 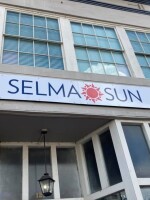 Selma Sun
Alabama Public Radio is proud to collaborate with the Selma Sun and its publishers Cindy Fisher, Brad Fisher, and Debrah Fisher. Past stories have included the renovation of the St James Hotel, the rescue of historic homes in Selma, and the announcement of the John Lewis Voting Rights Act by Congresswoman Terri Sewell at the foot of the Edmund Pettus Bridge
See stories by Selma Sun
Related Content
News from Alabama Public Radio is a public service in association with the University of Alabama. We depend on your help to keep our programming on the air and online. Please consider supporting the news you rely on with a donation today. Every contribution, no matter the size, propels our vital coverage. Thank you.
Donate