In 1776, the right to vote was afforded to white men, over the age of 21, who owned property, which only accounted for 10 to 20 percent of the population. In 1870, racial barriers to voting were theoretically removed by the 15th amendment, but black men were still denied the opportunity to vote in most states. In 1920, white women were given the right to vote. But this pseudo political process still excluded black women and discriminated against people who were poor, disabled, illiterate, and non-English speaking. The Voting Rights Act of 1965 provided far-reaching protections for minority voting rights at the state and local levels. But in 2013, the Supreme Court reversed that decision. As a result, over 1200 polling centers in Southern states have been closed and 33 states have introduced, pre-filed, or carried over 165 bills to restrict voting access.

In a 2021 speech, Senator Raphael Warnock referred to efforts of voter suppression as “Jim Crow in new clothes.” Methods of voter suppression target people of color and include voter registration restrictions, poll location changes and closures, limited access to early voting, criminalizing the distribution of water and food to voters standing in outrageously long lines, excluding citizens with a felony conviction from voting participation, voter purges that are based on inaccurate information with limited notification, gerrymandering and voter intimidation.

The American Civil Liberties Union provides stats of those most affected by voter suppression tactics:

In addition to black and brown folk, voter suppression also impacts people with disabilities due to the inaccessibility of polling locations and indigenous voters due to the remote locations of reservations.

Another form of voter suppression is related to voter literacy--being informed about who and what you are voting for. Vulnerable voters can be discouraged from civic participation due to disillusionment and inconvenience, believing their vote doesn’t count or won’t be counted, or when they do vote, voting against their interests due to misinformation and manipulation. Our democracy requires access, awareness, education and transparency. If, as Judge Damon Keith warns, “democracy dies in the dark,” we need to bring these efforts of disenfranchisement to the light. Participatory democracy hinges on the participation of all eligible and willing voters and has implications on public policy.

Voting has never been as equitable or inclusive as it seems—always available to some and denied to others. Voting should not be a privilege, it should be a fundamental right.

I’m Robin Boylorn, until next time, keep it crunk… 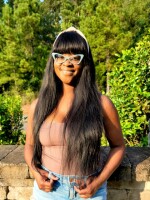