Alabama Public Radio is celebrating its fortieth anniversary this year. The news team has generated a lot of stories in all that time. And we’ll be spending the year listening back to the best of the best of these features. That includes this story from 2018 by APR student intern Allison Mollenkamp. She was part of the newsroom’s international award winning documentary on the fiftieth anniversary of the death of Doctor Martin Luther King, Junior

“Well if Lee’s birthday is not worthy of celebration, apart from Jesus Christ, I don’t know whose is,” Jones proclaimed.

Jones and his supporters all gathered in the auditorium at the state archives building in Montgomery. Men in grey confederate uniforms sit side by side with men in motorcycle jackets and women dressed in their Sunday best. The mood moves between celebration and the sense that a grand cause is under attack.

“It really has been a tough year for us, hasn’t it?” Pat Godwin asked the crowd. She’s with the United Daughters of the Confederacy.

“But actually not just this year. It all began on the seventeenth of June, 2015, when in Charleston, South Carolina, Dylan Roof started this avalanche of cultural genocide.”

Dylan Roof is the South Carolina Man who became the first person sentenced to death for committing Federal hate crimes. He shot nine black churchgoers to death in 2015. The genocide Godwin is referring to is all things Southern.

“In eighteen-sixty-one they allowed us to fight with bullets,” said Pat McMurry. He’s a member of the Sons of Confederate Veterans’ Mechanized Cavalry.

“They won’t let us do that now, so far,” McMurry said. “But today we’re being fought against with weapons that are far more long-reaching and powerful than a bullet.”

The idea of an ongoing battle is shared by a very different group of people that met a few days earlier just blocks away. The Dexter Avenue King Memorial Baptist Church sits one block from the state capitol, and the sanctuary is filled to standing room only. Dr. Martin Luther King, Junior served as pastor here from the mid to late 1950’s. There are women in church hats and others in shirts emblazoned with King’s picture or quotes from his speeches.

One notable difference being this event and the one for Robert E. Lee is the diversity. This crowd looks like what King would have wanted, black and white people sitting together.

The main event of the day was the pastor of what was once King’s church: the Reverend Cromwell Handy. There’s a sense of a fight here too, though Reverend Handy was careful to never names who his congregation might be fighting against. It’s easy to figure out, though.

Several members of the audience also remember the days of Rosa Parks and Dr. King.

“I actually participated in the parade, I mean in the march from Selma to Montgomery in that I marched from St. Jude campus to the capitol,” said Jacquelyn Houzz. She splits the year between Chicago and Montgomery.

Annie B. Lavette was a student in Montgomery when Dr. King was pastor at the Dexter Avenue Baptist church. She enjoyed the birthday celebration event.

The Sons of Confederate Veterans event wasn’t explicitly about race or slavery. But let’s go back to that moment where Pat Godwin mentioned Dylan Roof. She called the after effects of his actions a cultural genocide. She and her compatriots mourn the loss of flags and monuments. What she made no mention of was the nine black people that Dylan Roof murdered. The Lee event wasn’t about race, but the crowd was very conspicuously white, save for three or four exceptions.

Alabama celebrates Martin Luther King and Robert E. Lee on the same day every year, despite the fact that we are one of only two states left that do so. There have been efforts to change this, to either do away with Robert E. Lee day or move it to another part of the year. For now, though, the dual holidays serve to demonstrate the reality of life in Alabama. We are still divided. The Sons of Confederate Veterans and the congregation at the Dexter Avenue King Memorial Baptist Church look back at different pasts and they dream of different futures.

There was another thing that separated the two events. The average age of the Sons of Confederate Veterans is fifty-six. On Dexter Avenue, elders who marched with King stood to hold hands with a crowd that included plenty of young people, including children who before last year had never known a white president. 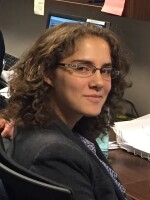 Allison Mollenkamp
Former APR intern Allison Mollenkamp is the inaugural Howard Scholar at NPR's investigative unit. She won her first national Edward R. Murrow award for covering mid-west flooding for Nebraska Public Radio.
See stories by Allison Mollenkamp
Related Content
News from Alabama Public Radio is a public service in association with the University of Alabama. We depend on your help to keep our programming on the air and online. Please consider supporting the news you rely on with a donation today. Every contribution, no matter the size, propels our vital coverage. Thank you.
Donate