Alabama Public Radio is celebrating its 40th anniversary this year. The news team has generated a lot of stories in all that time. And we’ll be spending the year listening back to the best of the best of these features. That’s includes this story from 2018 that aired as part of APR’s coverage of the assassination of Dr. Martin Luther King junior that occurred fifty years ago. APR’s international exchange journalist Ousmane Sagara did this story for our listeners from his home in the West African nation of Mali. Here is an encore airing of that story from the APR archives.

King’s work and impact here in Alabama is being remembered in the United States, but not just in the U.S. Alabama Public Radio participated in a visiting journalist program last year with the West African nation of Mali. That’s where the APR news team met Ousmane Sagara. His home country has its own relationship with Dr. King. We invited Sagara to file this report from Mali’s capitol city. The story begins with King’s reaction to his visit the West African nation of Ghana.

"The road to freedom is a difficult, hard road. It always makes for temporary setbacks," said Dr. King during a sermon he gave in Montgomery in 1957.

"And those people who tell you today that there is more tension in Montgomery than there has ever been are telling you right," said King.

The sermon was called The Birth of a New Nation. The inspiration wasn’t what was happening in the United States, but rather the African nation of Ghana. He had just returned from celebrations after Ghana declared independence from Great Britain. King looked at the fight for freedom in Africa, and he saw a reflection of what was going on in the U.S.

My home country is Mali. Ghana is on our southern border. But, we remember Dr. King, too. In Mali, we have living tributes to King.

‘’ We have an English club in Mali here which name is Martin Luther king," says Mohamed Koita. He's the chairperson of ‘’Martin Luther King’s club’’

"There, we learn his idea and also a mission that he did in American society," says Koita. "So, we can say that thanks to him, colored people in USA are living in better conditions. I listened him more than a hundred times. In his speeches, he is like a prophet. It occurred exactly as he said.”

“Martin Luther King is one the greatest black leaders of civil right movement," says Mariam Kone,  a human rights worker in Mali. She draws inspiration from how Dr. King fought for civil rights in the U.S.

“And also he was a leader who raised up the voice of black Americans who had no voice at that time, living in precarity and who really need to get all the right to live like other Americans.”

That is why during my time in Alabama, I wanted to visit The Birmingham Civil Rights Institute. I took part in a visiting journalist program, which is how I came to work in the newsroom at Alabama Public Radio. That led me to the Institute in the city of Birmingham.

I was shocked by the living conditions of black people. But, when I met black and white peoples, I was relieved, because that explained how they wanted to learn from this place to live together in peace forever.

And, as the world prepares to remember the fiftieth anniversary of Dr. King’s assassination, one might wonder what his legacy might be in the future. I asked people on the streets of Bamako on what they thought…

“What I would say to him, is to educate more the young African leaders, and also give them the ideology during the civil rights movement”.

If King were alive, what people would say to him? “I would just congratulate him, and do my best to learn with him as possible”

If King were alive, what people would say to him? “ I would say wow! His dream became reality. And I hope he could be here to see that”.

That story came from the Alabama Public Radio archives as APR celebrates forty years on the air. The feature from journalist Ousmane Sagara from the West African nation of Mali helped APR win a Gold Radio Award from the New York Festivals International Radio competition. Our stories about Dr. King in Alabama were also honored with the Salute to Excellence award from the National Association of Black Journalists. We’ll be diving into the APR archives as we celebrate forty years on the air here in Alabama. 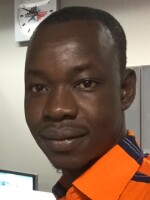 Ousmane Sagara
Ousmane Sagara is a journalist based in Bamako, the capitol city of the West African Nation of Mali. He worked alongside the Alabama Public Radio news team as an exchange journalist in 2016. When APR launched a major project to produce coverage of the fiftieth anniversary of the assassination of Dr. Martin Luther King, junior, news director Pat Duggins contacted Sagara, via Facebook messenger, and invited him to report for APR from Mali on how his nation feels about King, fifty years after his death.
See stories by Ousmane Sagara
Related Content
News from Alabama Public Radio is a public service in association with the University of Alabama. We depend on your help to keep our programming on the air and online. Please consider supporting the news you rely on with a donation today. Every contribution, no matter the size, propels our vital coverage. Thank you.
Donate