Alabama Public Radio is celebrating its fortieth anniversary this year. The news team has generated a lot of stories in all that time. And we’ll be spending the year listening back to the best of the best of these features. That includes this story from 2019 by APR student intern Tina Turner. APR news spent fourteen months investigating human trafficking in the State. Tina produced this feature on the challenges LGBTQ youth face in Alabama when it comes to being trafficked. Here’s Tina’s story from the APR archives. And, a note to our listeners, this story contains content of an adult nature.

About a half dozen students are gathered at Auburn University’s campus in Montgomery. They’re watching the documentary “Assault on Gay America”. It tells the story of how Billy Jack Gaither was beaten to death with an axe handle. The message is… in Alabama--violence against gay people is not a hate crime.

“Good afternoon everyone wonderful to see you all here this beautiful afternoon in Montgomery,” said Doctor Paul Hard as he greeted the crowd was bigger for this talk at the Alabama Capitol. The Auburn University Professor organized today’s twentieth annual Vigil for Hate Crime and Violence.

“If you’re great for the nice weather in spite of everything they were telling us would you just say, Yes!” asked Doctor Hard.

On one side of Dr. Hard is the flag of Alabama, on the other is rainbow Gay Pride flag. And, he wasn’t the only speaker…

“We couldn’t go any further today without taking a moment to recognize those who are here as our allies, our supporters, our fellow family members,” said Daroenshea Duncan Boyd, a transgender woman of color. She’s the CEO of a group called Alabama’s TAKE. That stands for Transgender Advocates Knowledge and Empowering.

“I’m super excited to be here,” said Duncan. “Like I said I hate I had to come in honor of 20 years for this vigil but this is the best place to be at because often time we know that trans women of color don’t have a voice in the race.”

The message tonight is that violence against gay or transgender people needs to be considered a hate crime. But, that’s not Duncan’s only concern. We sat down with Duncan at TAKE headquarters in Birmingham, where the agenda is a little different. TAKE helps trans women of color including those who work in the sex trade. That is something Daroneshia knows about.

“Oh girl I was inside my house and the first person believe it or not it was first person was a lawyer,” said Duncan, who performed sex acts for money…

“He was a lawyer so it was a great experience and it wasn’t, it was something different for me because he wasn’t my ideal type of guy but oh well I made work and made over like $400+ 500 or whatever so I wasn’t complaining about it but that first time but then again it got harder as they days progressed honey because everybody isn’t going give you four and five hundred dollars so just being real with yourself and knowing that sometimes you’re going to have to work with $40 or something,” Duncan recalled.

And her reason for turning to sex work is simple.

“I had to turn to it. I had lost a job and I was working. I had unemployment and unemployment was only $180 or $190 something a week,” Duncan recalled.

Duncan says she was never under the control of a pimp, but she says others in the LGBTQ community are.

“Not being able to find stable income, stable housing, so you have to do something in order to survive,” she observed.

This is where Duncan begins to address the issue of gay and transgender trafficking. For many teenagers, it starts with running away from home, typically over arguments with their parents. Duncan says being gay on top of being a teenager can complicate things…

“A lot of youth are forced out of their homes. Especially here…conservative…evangelical Christian, and all that stuff in a red state,” Duncan stated. “If you’re push out of the house from your family, you don’t have support or whatever…You’re gonna to have to find a way to survive.”

The Human Trafficking support group Polaris says forty percent of homeless youths in the US identify as LGBTQ. Homelessness is considered a key factor for young people who end up being trafficked. Duncan’s job is try to turn these young people around, like she was…

For Duncan that meant Survival sex. Trafficking involves a pimp. And the FBI says if someone sells a minor for commercial sex, the law considers that young person to be a victim of trafficking.

And in the Huntsville area, a lot of these young people come here.

Safe Harbor Youth is a Transitional Living Program for youth, ages 16-22, who have runaway from home, are neglected, homeless, living on the streets, or victims of human trafficking

“Most of our kids identify as bisexual and that’s because they’ve been sold to this person or that person,” said Lynn Caffrey, who runs Safe Youth Harbor. She was also a victim of child sex trafficking where he was sold to both men and women.

“Saying it’s a push to be gay that’s not true. Well in human trafficking, like me I was sold to both males and females so I had to make a choice when I got my life changed. Do I want to be gay do I want to be straight? You have to really learn out who you really are. And a lot of times they don’t know who they really are when they are that young,” she observed.

Caffrey says teens who identify as transgender might have it the toughest when it comes to acceptance, particularly at home. But, Caffrey has opinions of her own when it comes to LGBTQ young people living in a conservative state like Alabama.

“Religion, bible belt, the south is so huge on it. But if you look at the book the bible is says judge not and you shall not be judged,’ she said.

Caffrey carries that message to Alabama’s faithful, in the form of talks at local churches.

“Like when I speak in churches and stuff. If you come to my house and you see a kid dressed in drag when you come to my house, don’t judge them,” Caffrey insisted. “That’s not what you are coming there for. If you can’t come there with an open mind and understand that their humans, their just like me and you. We are just like me and you but they have different sexualities. We are not her to judge them on their sexualities.”

Back at TAKEN’s office in Birmingham. Daroneshia talks about the constant struggle to keep at risk clients who also happen to be gay or transgender from falling in the trap of being trafficked.

“When you are vulnerable, especially the ladies that experience substance abuse, they basically settle for this condition, not knowing that it’s really toxic,” said Duncan.

For Duncan, the story of one girl she knew comes to mind. She was fifteen years old, pushed out of her home, who took up with a man in her forties just to survive. Duncan says it doesn’t take much for a situation like to go very badly…

“It’s a risky business, and it’s very dangerous, because you don’t if your next John will be…you know…will be the person who will kill you.”

That story came from the Alabama Public Radio archives as APR celebrates forty years on the air. The feature from former APR intern Tina Turner helped APR win twelve awards for excellence in journalism. To this day, APR receives phone calls and emails from victims of human trafficking asking for help. We’ll be diving into the APR archives as we celebrate our fortieth anniversary on the air here in Alabama. 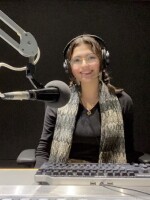 Tina Turner
Former APR Student reporter Tina Turner now works as a producer for AT WILL MEDIA based in New York City. During her time in the APR newsroom, Tina produced stories on the trafficking of LGBTQ youth in the Bible Belt, as well as ghost tours in Tuscaloosa, and the refurbishment of the St. James Hotel in Selma.
See stories by Tina Turner
Related Content
News from Alabama Public Radio is a public service in association with the University of Alabama. We depend on your help to keep our programming on the air and online. Please consider supporting the news you rely on with a donation today. Every contribution, no matter the size, propels our vital coverage. Thank you.
Donate